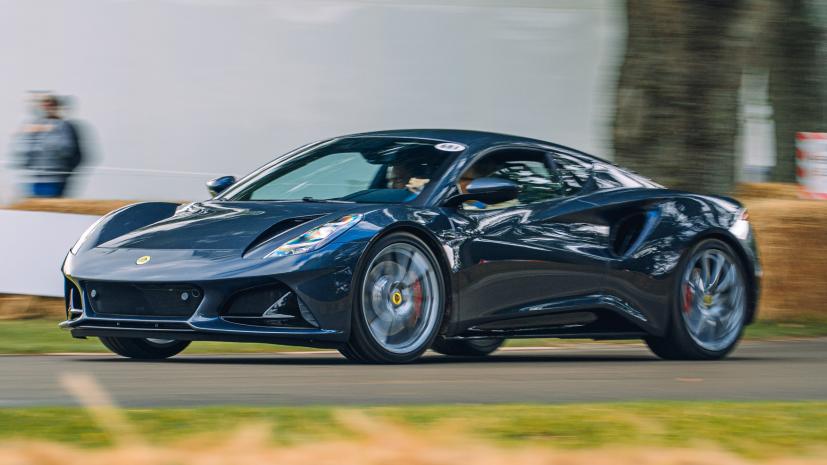 You have to wait a pretty long time for a brand new Lotus. About thirty years usually does the trick. But at the 2021 Goodwood Festival of Speed we got to see a max-attack electric hypercar straight-outta-Norfolk and this: Lotus’s fresh (and last-ever petrol-powered) sports car.

The Emira took to the hill in a rather sombre spec, packing the supercharged V6 engine and manual gearbox rather than the surprise AMG turbo four-pot. Meanwhile a lairier-looking blue Emira was submerged in saliva for the entire weekend as people salivated over the new 400bhp Cayman-botherer. Lotus is said to have ensnared a healthy heap of deposits too.

Here’s a novel idea: a family crossover that’s slammed down close to the road, with a chopped roof and lower centre of gravity. It’s like having all that extra ride height isn’t great for driving manners… Someone should sell this to the public, it might catch on.

We digress. Though it’s ironic Ford’s new hybrid rally car is a Puma that’s been slammed, cut and shut into a Fiesta-shaped silhouette, we’re not complaining because modern rally cars just look the business. And with a 100kW electric motor supplementing the 1.6-litre turbo engine and the ability to whoosh from stage-to-stage on battery power alone, this is a motorsport special with a conscience. It loves nature. Until it barrel rolls into a forest.

Goodwood Festival of Speed best supercars 2021 Polestar 2 Experimental
This was a surprise: a sort of Polestar 2Fast2Furious. This is the Experimental, a Polestar that’s lower, stiffer, and angrier. A toe in the water to see how fans of Swedish EVs react to a high-performance version.

It’s not a Tesla-busting drag race monster: software rewrites have only eased power up from 402bhp to 469bhp. This one-off is all about the handling, thanks to much stiffer adjustable dampers, a reinforced bodyshell and beefier Akebono brakes from the gorgeous Polestar 1 coupe.

Is this the future of the BMW M3 supersaloon class?

This is what happens when Lamborghini does ‘nerdy’. The Super Trofeo Omologata is inspired by Lambo’s racing Huracan, so it’s festooned with trick aero and shuns four-wheel drive. It weighs 43kg less than the Huracan Performante, makes over fifty per cent more downforce than the last Lambo-geeky, and the floor mats have been on a carbon fibre diet. Really.

Y’know when you hear that old cliché about a car looking like it’s doing 322 km an hour when it’s standing still? Yep. The STO ticks that box… with a flamethrower. So it looks like it's doing the speed of sound while it's tackling the Duke of Richmond's front garden.

Once upon a time, the McLaren P1 stormed up and down the Goodwood hillclimb bending spacetime as it rocketed by. Now McLaren has applied its plug-in hybrid know-how to a series production V6 supercar that costs less than the official UK average house price.

Goodwood Festival of Speed best supercars 2021 BMW M240i
Are we sold on the looks yet? Does it matter that the straight-six M240i has four-wheel drive as standard? And the manual gearbox has been erased from any and all 2 Series coupes? So many questions. But none about that colour. Mmm, purple.

Goodwood Festival of Speed best supercars 2021 SCG004S
And the award for ‘most interesting car with a deeply underwhelming name borrowed from a dishwasher’ is this. The road-going Glickenhaus, or SCG 004S as they insist on calling it.

Looking for all the world like a 1960s prototype that was built using captured alien technology, this is the first customer example of the road-going GT3 racer complete with a 650bhp GM V8, open-gate manual gearbox, and central driving position.

Rimac Nevera Goodwood Festival of Speed best supercars 2021
We drove the Rimac Nevera in Croatia earlier this month. Our tiny minds have not yet recovered, but Rimac was good enough to ship one over to Goodwood and blast it up the hill, so the gathered crowds could enjoy the spectacle of a car that makes no discernible noise accelerate as quick as an F1 race car.

Goodwood Festival of Speed best supercars 2021 Ineos Grenadier
The no-nonsense off-roader from everyone’s favourite friendly chemicals corporation cometh. Thanks to its appearance at Goodwood 2021 we can now confirm the Grenadier looks quite Defender-ish, the interior is gloriously button-focused, and it can go around a corner on a posh person’s driveway without falling over and waving its knobbly tyres in the air. Which is very important, if this start-up is to be a success worthy of investment being sunk into its birth.

Here it is acting as a support vehicle for the Ineos cycling team. We’ve checked with the bosses and it’s okay to run a photo of this much lycra on a family website just once.

Goodwood Festival of Speed best supercars 2021 Lotus Evija
While the affordable and quick Lotus Emira nicked the headlines, the not-at-all-reasonably priced and physics-upsetting Evija EV hypercar certainly did its best to upstage its new stablemate. The 2,0000bhp Brit will arrive with owners later this year. They're probably shopping around for cheaper energy deals and erecting wind turbines in their back garden as we speak.

Goodwood Festival of Speed best supercars 2021 Aston Martin Valkyrie
It’s almost here. The Aston Martin / Red Bull Racing / Cosworth / Adrian Newey collab is T-minus about six months from arriving with its patient owners. Aston Martin probably needs every second it can carve out to finalise, develop and hone the 1000bhp V12 spaceship’s road manners… but decided bringing the prototype along to FoS and screaming up the famous hillclimb was a better use of resources. We like that kind of attitude.

Goodwood Festival of Speed best supercars 2021 McLaren 720S GT3X
When is a downforce-obsessed McLaren not a Senna? When it’s a 720S GT3X. This is a curious car: not road legal, not eligible for racing, and revealed without the pomp and ceremony of the Senna, Speedtail or even a 765LT.

What we have here is one of those ‘what if racing rules were popped in the bin for a weekend’ fantasies. The GT3X uses the same aero package as a 720S GT3, but its engine is unrestricted, so it’s allowed to develop the 720 horses its name suggests. It’s also 200kg lighter than a 720S road car, and it’s on slick tyres.

Don’t get hung up on ’what’s the point of this when the Senna GTR exists’ or any other McSemantics. Just revel in the fact this batmobile did a 45-sec run up the hill in the hands of racing driver Rob Bell, making it the official Goodwood speed champ of 2021.

Goodwood Festival of Speed best supercars 2021 Lamborghini SCV12
Speaking of ‘it can’t race, it can’t road, it can’t be bought by just anyone and it can only be driven by superheroes…’

This pointy beasty is Lambo’s love letter to its V12: the Essenza. It’s basically the most manic 12-cylinder engine ever dreamt up by Sant’Agata – rocking around 820bhp – and slotted into a rear-drive track-only chassis that can apparently cleave 1,200kg of downforce from the air as it reaches 250 kmh.

In an alternate (better) universe, this thing has just performed a Le Mans photo-finish with the Aston Martin Valkyrie AMR… and a fighter jet.

Goodwood Festival of Speed best supercars 2021 Porsche 911 GT3
The GT3 without a wing sang up the Goodwood hill all weekend, treating onlookers to a spot of 9,000rpm fury in a dignified-looking package. Yes, the Touring loses the standard GT3’s swan-neck Big Wing, and doesn’t it look svelte for it?

It even pulls off chrome tastefully. Available with a six-speed manual or a seven-speed PDK gearbox this time, this really is all the sports car you’d ever need. Unless you need 12 cylinders and a Ford Fiesta kerbweight in downforce. In which case, have that silly Lambo instead, yeah?