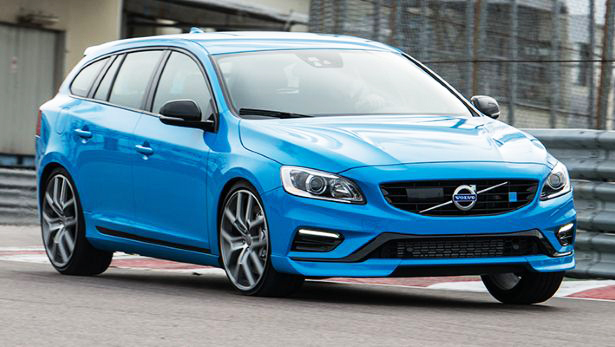 What’s that very blue thing?
It's the new V60 engineered by Polestar, a Swedish motorsport outfit that’s proved it knows a thing or two about building fast race cars.

Polestar has been making championship-winning Volvo-based STCC cars since ‘96, and more recently caused quite a stir Down Under by splitting the Holden/Ford dominance in V8 supercars. This V60, however, is the speedy Scandis first full-on production road car.

So Polestar’s a tuner?
Not exactly. Think of Polestar as an Alpina/Brabus-style firm – an independent company in their own right but tinkers exclusively with one marque. Polestar is as now officially Volvo’s ‘Performance Partner’, a kind of Volvo ‘M’ division to zhoosh up the brand image.

Admittedly this isn’t Volvo and Polestar’s first collabo, as they’ve produced two brilliantly mental high horsepower concepts: the 400bhp C30 and500bhp S60 – both of which we loved, but neither of which was a true production car.

What changes have been made?
If you were expecting bonkers horsepower like Polestar’s previous work, we’ve got bad news. The V60s straight-six T6 turbo hasn’t had much surgery: just a new, bigger BorgWarner twin-scroll turbo and intercooler bolted on. Even so, that’s enough to squeeze 350bhp and 500Nm of torque from the 3.0-litre six. That’ll get the V60 from 0-100km/h in 5.0 seconds and onto 250km/h, with power reaching the road through a Haldex four-wheel drive system.

350bhp is a bit limp for a proper performance-thing, no?
That’s one school of thought, but not Polestar’s. The Swedes hold that a performance car isn’t all about grunt, but having a decent chassis that can handle the power is on tap.

This new suspension has made the car a massive 80 per cent stiffer than a standard V60 R-Design. That might hint that one pothole would instantly turn your spine into dust, but in fact the ride is properly sorted. It’s firm but handles broken roads with refinement, and swallows lumps and bumps with no jarring harshness being shot back through your coccyx. Which means you can attack twisty bits of road at speed.

Doesn’t sound like something a Volvo driver would say...
Well, this car isn’t your typical Volvo. As you turn the key, a fruity exhaust note spurts from the twin tail pipes. The throttle has also been re-mapped, as has the steering, so the V60’s controls feel more enthusiastic.

But it’s in the corners where the V60 really comes into its own. Big ventilated front discs and six-piston Brembo calipers offer serious stopping power , this big load-lugger stops with serious power, letting you brake late into a corner and then throw it in in a very un-Volvo fashion. Where, thanks to that expensive shopping list of motorsport parts (the decent suspension set up, grippy tyres and modified four-wheel-drive) you don’t topple off the road.

If you’re expecting sideways heroics, forget it – the four-wheel drive won’t play. But the V60 is remarkably composed through corners, with bags of traction and enough low-end torque to make it properly quick point-to-point.

So what’s the catch?
Sportiness tends to compromise comfort, and unfortunately Polestar hasn’t been able to magic up a loophole. The big tyres have a tendency to tramline and generate a racket at cruising speed that the big exhaust can’t quite cancel out.

Then there’s the gearbox. Polestar has tried to make the lazy six-speed auto more responsive by re-wiring its brain, so the shifts are harder, faster and there’s even a launch control mode. But compared to a proper double-clutch effort, it’s feels lazy, with a terrible tendency to sniff around for gears at constant throttle.

It still looks like a Volvo…
Sporty but subtle was the brief. On the outside you’ll notice a cheeky chin and rear spoiler, restrained badging and a rear diffuser that increases downforce and stability at higher speeds.

It’s a similar understated story inside, with new, bulkier-bolstered sports seats, blue stitching around the cabin to offset grey alcantara trim, and a carbon fibre-clad floating centre console. If it’s all a bit muted for you, opt for the shouty Polestar blue paint. Want a Q-car? Go for black.

Will we be seeing more of Polestar?
Yes, which is a Good Thing. As a separate company, Polestar can leave Volvo to sort out all the safety-gubbins and emission regulations at the factory, while they just play around in their shed and make things fast. The V60 proves Polestar can set up a car for the road, so bring on the future and more exciting Volvos.