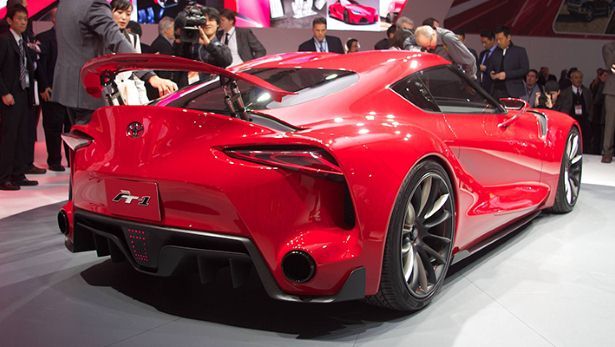 Detroit's show this year was more global than ever. It was also pretty relevant. The new production metal was mostly the sort you could relate to without too much explanation, and the concepts were attractive but not too fanciful.

Toyota-Lexus had a great show. At last there's concrete evidence of what company chief Akio Toyoda and his engineers have been promising for a while. They want to make cars that are more than appliances: cars people actually yearn for. The Toyota FT-1 looks great, and more important it shows how the company is developing a distinctive design voice for all its cars. But if there's a production spin-off (big if) it's a way away. Lexus, as shown by the RC-F, is a few years ahead of the parent company in getting its design distinctive. And the RC-F should be a bit of an event to drive as well as to look at - behind those rapier headlights it comes with natural aspiration.

Not such a happy show for VW-Audi. VW has earmarked growth in the US as crucial for its world-domination plan, and is making a special local Passat. But it actually slipped backward in sales last year. The dealers need the new big crossover, and it's still a couple of years away. The Dune Beetle was just dressing for a bare window. And the Audi Shooting Brake concept? Hmm, well under there is the new TT. I could only see three or four years of foot-dragging progress since the last TT, not the eight summers that have actually passed. Mind you, the dash and its interfaces are cleverly updated.

Over at Porsche, the 911 Targa is a fun riff on the original's Targa design. But good grief what a bag of unnecessary weight and complication its power roof is. Why didn't they just top-hinge that rear window and have you use your own muscles to pack away the lightweight magnesium roof panel. This feverish complication smells of the Honda CRX Del Sol all over again.

Better news from the Germans when Mercedes unveiled the new C-Class, a great-looking car with interior quality and technology that blew people away. For BMW too it was a decent show, with the M3, M4, 2-series and 4-cabrio all on their first public outings.

And Volvo cleverly used a concept to cover for the fact there's a lot of waiting going on. But even though its big cars are desperately old, the company made a profit and is investing heavily in a new vehicle architecture and powertrains. Best of all, the XC Coupe concept is another terrifically well-wrought piece of design. A bright future beckons for the plucky Swedes.

The Koreans, Hyundai-Kia, storm ever onward. Their rear-drive platform produced the Genesis saloon, and the Kia GT4 concept. The Genesis looks a bit conservative, but it's stacked with tech and quality. It goes down a storm in the US, but over here only Hyundai dealer bosses will be driving them. Still, it'll give the i40 more cred. The GT4 moves Kia's design onward, its surfacing mire voluptuous than the cars they currently sell. They seem serious about turning it into a production car too.

Nissan had a new saloon too. It's a concept for the next Maxima, and has a real swagger to it. The Maxima is made over there and sells bg numbers. The new concept is big, too big for a mass-brand car in Europe so won't sell here. But the design is world-class sophisticated. Oh, and the Tokyo-show IDx concept cars were on display at Detroit too, a good sign. Nissan's engineering and marketing chief Andy Palmer said they're getting close to a public 'yes' so we like this company right now.

So to the big American three. Of which Ford made easily the biggest splashes. This was the Mustang's public in-the-flesh debut. And it looks like the right mix of American heritage, world-class finish, and sports-car tech at what should be good value. But Ford's really big news was in trucks. The F150, best-selling vehicle in the US for 37 years, has switched to an aluminium body. That represents a vast investment in factories, and a major risk that can actually do the manufacturing consistently well. Betting the farm indeed. Yet the visual design plays very conservatively, not having changed much at all. The F150 is too big to make sense in Europe, but the Transit, Britain's best-selling van for even longer, is making the trip the opposite way. This year they start building it in Kansas. One Ford indeed.

Chrysler and GM have modernised their lineups impressively since bankruptcy, but at the show this year they were quiet. The Chrysler 200 is a vital catch-up but a hard one to get excited about. It's the brand filling a huge hole in its lineup by making a slightly posher Dodge Dart. It won't sell in Europe now that the Lancia rebadging exercise failed so badly. Although Fiat has now bought the remaining shares in the Chrysler Group, there's still a lot of work in making Fiats and Alfas that will go well over there, and Chryslers that'll play on our side of the Atlantic.

GM's main news was just variants of existing cars. Not really enough for the hometown show. That said, the coupe version of Cadillac's impressive ARS looked good. And yes, we are indeed wildly excited about the very sophisticated Corvette Stingray Z06.

I can't get over the fact that such diverse names as Chevrolet and Jaguar have made two cars as similar in template as the Z06 and F-Type R. They're both compact two seaters with rear-drive, V8, supercharger and lots of aluminium in the structure. Things really are getting more global.