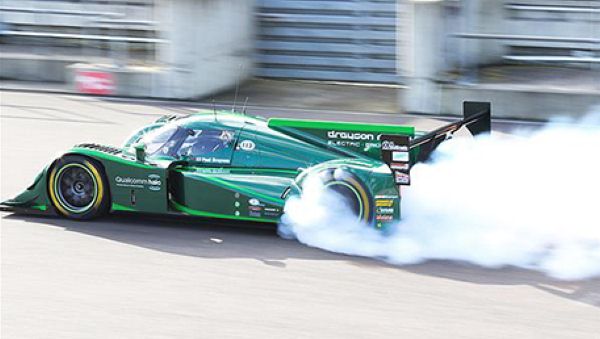 Internet, meet the new fastest electric car... in the world. It's a Drayson B12 69/EV, converted from a Lola LMP1 Le Mans racer, and it has just claimed a new fastest world electric land speed record for Britain.

Lord Drayson, chief executive of Drayson Racing Technologies, former Minister of Science and racing driver, took the wheel of the 850bhp, quad-motor powered electric prototype, gunned it down the RAF Elvington Airfield in Yorkshire as the sun was setting, and hit a new top speed of 204.185mph (an average of two runs). That smashes the previous record by a whopping 29.2mph, set way back in 1974 at a speed of 175mph by Battery Box Electric in America.

"It is not the outright speed of 203mph that is most impressive about this record," Lord Drayon commented, "but the engineering challenge of accelerating a 1,000kg vehicle on a short runway over a measured mile.

"This is a true celebration of Britain's leading position within the burgeoning electric vehicle industry, and I'm delighted to be at the forefront of this electric revolution."

The FIA must still confirm the top speed, and Lord Drayson still wants to set more records for acceleration (it's estimated to hit 60mph in just 3.0 seconds), so check back for more updates.

Just think, 203mph in a car made from recycled carbon fibre that weighs less than a Fiesta, and with more power than a Ferrari F12. With no sound. In fact, on a recent test in Rockingham (which you can view below), Lord Drayson noted what kind of challenge electric cars - and thus, an absence of a ‘screaming engine' - posed. "It's quite hard to judge how fast you're going", he said. "You tend to out-brake yourself going into corners a bit too fast."