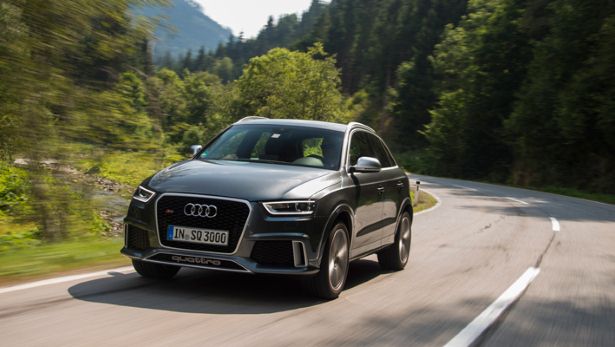 What's this then?
This is the first of Audi's SUV range to get an RS badge and, indeed, the first compact SUV ever to get some proper performance treatment. And no, we're not counting the Nismo Juke. Not fast enough.

A performance compact SUV. Err, why?
Well, Audi's rationale is that people are willing to pay a truckload of cash for a blingy SUV. 70 per cent of Q7s were specced with super-luxo S Line spec, so it figured it may as well stick an RS drivetrain in the A3-based Q3, and in its words, create a car without competitors. Then charge £43,000 for it. £9,880 more than the S3 (which is faster to 62mph by 0.5 seconds), and £10,920 more than the previous range topper.

Wow. That's an awful lot of money
Isn't it just.

So what d'you get?
A 25mm lower Q3 that uses the same turbocharged 2.5-litre five-cylinder engine as the now-defunct RS3, pared down to 306bhp and 310lb ft of torque. That's less than the 340bhp RS3, but still means you'll get from 0-62mph in 5.3 seconds, and hit a limited top speed of 155mph. As I'm sure you'll have gathered by the shouty Quattro badges, power's sent to all four wheels through a standard-fit seven-speed S-tronic dual-clutch gearbox.

There's a body kit, 19-inch wheels, and Audi Drive Select as standard too. The latter lets you beef up the exhaust sound and throttle characteristics by selecting from auto, comfort or dynamic modes.

But does it feel like an RS?
Audibly, yes. There's all the whumps and rumbles you'd associate with a hot Audi. But elsewhere, not so much. Because you're further away from the road, acceleration doesn't feel as mein gott quick as its stablemates. The steering's not terribly communicative either - another RS trait - though it is nicely weighted.

What about through the corners?
Its high-sidedness means that the front end isn't as pinned and there's a bit more body roll, not helped by the 1655kg mass. Though that's not an entirely bad thing - it rides very well without the spine-grinding proclivities you'd find elsewhere in the RS lineup, and out on poorly surfaced roads it feels remarkably pliant. Infinitely more than the old RS3 Sportback. And if you really grab it by the crotch, it still does that magic RS thing of getting you down the road faster than your ability should really allow.

So worthy of the RS badge, then?
Not really. Yes, the Quattro voodoo does flatter you, and yes it's quick, but there's just not enough Teutonic, RS muscle to back up the bodywork's bravado. Then there's the inside. It's all very... dull. The standard-looking seats don't bring any flavour of performance, and because of its high SUVness, can't be adjusted low enough to give taller drivers that sitting-in-a-bathtub feel. Then there's the dash. It's basically what you'd get in a normal Q3 with some added carbon trim, which feels a bit perfunctory.

So I shouldn't bother?
If you're an RS fiend, no. The RS Q3 feels watered down compared to the rest of the range. It's more of an RS Lite. Undoubtedly quick, but too far off the mark to properly get your kicks. But if you're after a super-fast compact SUV, if you desperately don't want the faster, cheaper S3 hatch, and if you think that the 240bhp Range Rover Evoque Si4 Dynamic is too slow, then yes. But that's a lot of ifs. This isn't a bad car, but we're just struggling to work why anyone in their right mind would actually buy one...